An Appeal to California’s Fire Agencies

Local, state, and federal fire agencies are urged to expand their approach to reduce loss of life and property to wildfires. Currently, the primary, and sometimes the only message citizens hear is to clear native vegetation (“fuel”) from around their homes. While creating defensible space is a critical component of fire risk reduction, it fails to address the main reason homes burn – embers landing on flammable materials in, on, or around the home, igniting the most dangerous concentration of fuel available, the house itself.

In addition, by designating native habitat as merely “fuel,” citizens are encouraged to see nature as something dangerous rather than a valuable part of their local community. Intact natural habitat provides vital ecosystem services that are necessary to maintain the health and well-being of surrounding human communities.

Fire risk reduction efforts must emphasize BOTH how to reduce home flammability and how to create defensible space without demonizing nature. Many homeowners have complied with defensible space regulations only to see their homes burn in a wildfire.

Public education materials must make clear that without addressing the entire fire risk reduction equation your home has a greater chance of burning in a wildfire. This includes creating defensible space AND retrofitting flammable portions of homes such as,

It also must be made clear to homeowners that by having well maintained and lightly irrigated vegetation within the outer 70 foot portion of the 100 foot defensible space zone can play an important role in protecting the home from flying embers and radiant heat. Bare earth clearance creates a bowling alley for embers and can actually increase fire risk if invaded by flammable, non-native weeds. In addition, research has shown that there is no additional structure protection provided by clearing beyond 100 feet, even on steep slopes, and the most important treatment zone is from 16‐58 feet.

Applicable fire research and a comprehensive approach to home protection can be found here:
http://www.californiachaparral.org/bprotectingyourhome.html

The New Message (above). The photo above shows a home with extensive defensible space and “fire-resistant” vegetation that burned during the May 14, 2014, Poinsettia Fire in Carlsbad, California. Addressing the entire fire risk reduction equation is essential.

The Old Message. A photo similar to the one above, often used in fire safety pamphlets, creates a false sense of security by implying that defensible space is adequate to protect a home from wildfire. As evidenced by previous photo, defensible space is not enough.

Mountain communities learning to use federal grants to eliminate wood roofs, a lead cause of home loss in wildfire

David Yegge, a fire official with the Big Bear Fire Department, is about to submit his fourth grant proposal to the FEMA pre-disaster mitigation grant program to pay up to 70% of the cost of re-roofing homes with fire-safe materials in the Big Bear area of San Bernardino County. Yegge has also assisted the towns of Idyllwild and Lake Tahoe to do the same. The grant includes the installation of non-ember intrusion attic vents.

“What Yegge is doing is revolutionary,” said Richard Halsey, director of the California Chaparral Institute. “For so long, the science of why homes actually burn in wildfires has been ignored by government agencies in favor of grants to treat wildland vegetation far from communities. Retrofitting fire-prone structures, in conjunction with 100 feet of defensible space, is the most effective way to protect lives and property from wildfire.”

Yegge’s first grant was for $1.3 million in 2008. He identified 525 wooden-roofed homes in need of retrofits in the community of Big Bear Lake. Only 67 remain. Helping to push homeowners to take advantage of the program is a forward-thinking, “no-shake-roof” ordinance passed by the Big Bear City Council in 2008 requiring roofing retrofits of all homes by this year. San Bernardino County passed a similar ordinance in 2009 for all mountain communities. Homeowners have until next year to comply. Such “future effect clause” ordinances can be models for other local governments that have jurisdiction over high fire hazard areas. “The California Legislature should adopt such an approach and Cal Fire should incorporate such retrofit programs into its new Vegetation Treatment Program,” Halsey said.

In order to qualify for the FEMA grant, a cost/benefit analysis must be completed. “Our analysis indicated that $9.68 million would be saved in property loss for every $1 million awarded in grant funds,” Yegge said. “FEMA couldn’t believe the numbers until they saw the research conducted by then Cal Fire Assistant Chief Ethan Foote in the 1990s. There’s a 51% reduction in risk by removing wooden roofs.”

“The FEMA application process is challenging, but well worth it,” said Edwina Scott, Executive Director of the Idyllwild Mountain Communities Fire Safe Council. “More than 120 Idyllwild homes are now safer because of the re-roofing program.”

The state agency that manages the grants is the California Governor’s Office of Emergency Services  (Cal OES), Hazard Mitigation Grants Division. Cal OES is the go between agency and they decide what grants get funded based upon priority established by the State Hazard Mitigation Plan. Without the help and assistance of Cal OES, it is not likely the FEMA grants would have be funded.

PHOTOS: One of the only houses left standing after the 2003 Cedar Fire hit the San Diego community of Scripps Ranch. The owner had just replaced his wood shake roof with a firesafe composite type, over the protests of the local homeowner’s association. 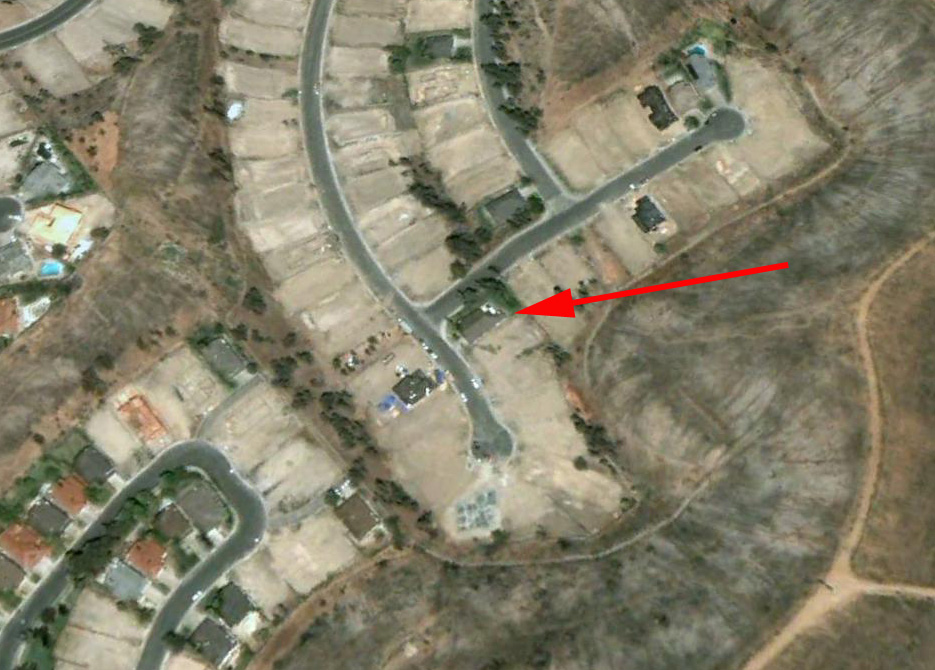